From Charlotte To Science: Why Now Is Prime Time For Biden To Embrace Bernie’s Marijuana Legalization Plan

From Charlotte To Science: Why Now Is Prime Time For Biden To Embrace Bernie’s Marijuana Legalization Plan

Let’s start with the first. Bernie Sanders has dropped out of the presidential race. Though he plans to remain on the ballots of the remaining primary states, he’s effectively suspended his campaign.

Joe Biden, in response, promptly extended an impassioned 800-word olive branch to Senator Sanders and his supporters, recognizing both for shaping important political dialogue. “Issues which had been given little attention — or little hope of ever passing — are now at the center of the political debate,” Biden wrote. “Income inequality, universal health care, climate change, free college, relieving students from the crushing debt of student loans. These are just a few of the issues Bernie and his supporters have given life to.”
Biden took it one step further and committing to include Bernie and his ideals as part of his administration stating, “I’ll be reaching out to you. You will be heard by me. As you say: Not me, Us.”

At the same time, legions of devout Bernie supporters – dubbed “Bernie Bros” – remain doubtful any radical platform adoption will take form. All this has set the stage for what could be a powerfully unifying shift were Biden to reconsider his current stance on federal marijuana legalization, which remains an illicit drug at the federal level despite being medically legalized by 33 states, of which 11 also allowing for adult-use consumption.

Senator Bernie Sanders has pledged to use his power as president to legalize cannabis via executive order within his first 100 days on the job, should he be elected. His plan was unveiled at 4:20 PM EST last October, and includes plans to vacate and expunge all past marijuana-related convictions in his platform proposal by creating an independent clemency board removed from the Department of Justice and placed in the White House.

A big part of his marijuana plan includes reinvestment it into the marginalized, largely minority, communities hit hardest by the War on Drugs, provisioning that “federal funding will be provided to states and cities to partner with organizations that can help develop and operate the expungement determination process.”

Sanders’ plan would allot $50 billion in tax revenue generated from the sale of legal marijuana and for these equalizing and reparation measures, $20 billion of which would be used to “provide grants to entrepreneurs of color who continue to face discrimination in access to capital.” Three additional $10 billion sums would be apportioned to funds or grants that aid businesses or communities disproportionately impacted by the War on Drugs.

Keeping Big Pharma and Big Tobacco from dominating a newly opened marijuana market is another essential part of Bernie’s federal legal marijuana approach. Companies who have formerly created cancer-causing products or have been found guilty of deceptive marketing would be banned from the industry, as would tobacco and cigarette.

To prevent marijuana market oligopolies taking form as they have in some already legal states (most notably Florida and California), market share and franchise caps will be put in place to prevent profiteering and consolidation under the Senator’s plan. “[A]s we move toward the legalization of marijuana, I don’t want large corporations profiting,” he said in an interview on Showtime’s Desus & Mero. 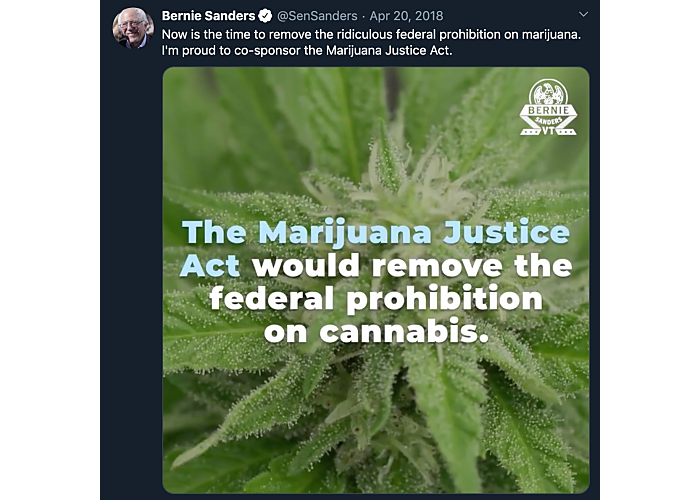 Last November, the former vice president replied to a town hall question that although he supports allowing states to determine their own marijuana policies, he is unconvinced on the science recognizing the plant’s relationship to other drugs.  “The truth of the matter is, there has not been nearly enough evidence acquired as to whether or not it’s a gateway drug,” he declared.

Though Biden opposes legalization on the federal level, he has declared that anyone incarcerated for marijuana should be released and have their criminal records expunged of any marijuana charges. Biden also supports removing marijuana from the list of Schedule I drugs where it sits out-of-place alongside a motley of drugs deemed to have zero medicinal value. He proposes moving it to the Schedule II category, making the plant more easily accessible to research.

See Also: Will COVID-19 Cause The US Government To Finally Treat Cannabis As A Medicine?

While that’s not nearly full federal legalization, it would be significantly more progressive than the decades-old laws marijuana finds itself trapped by today. It also illustrates some semblance of reason; no one truly believes marijuana belongs in the same drug classification as heroin, and Biden would be the first president to acknowledge and enable the medicinal value of marijuana.

But he can go a step further, and more modern, well-studied marijuana advocates can lead him there. Research already exists that correlations between marijuana and other drug use have been weakened by studies that show quite the opposite. Cannabis access has been found to be associated with reduced rates of opioid use and abuse, opioid-related hospitalizations, opioid-related traffic fatalities, opioid-related drug treatment admissions, and opioid-related overdose deaths.

A 2020 study by the Journal of Palliative Medicine found that the addition of medical marijuana to cancer patients’ palliative (pain reductive) care regimen “withstood the development of tolerance and reduced the rate of opioid use, over a significantly longer follow-up period than patients solely utilizing opioids.” Another 2020 study found a significant reduction in opioid consumption for pain following traumatic injury when supplemented with oral synthetic THC, while opioid consumption was unchanged for controls.

“Gateway Drug,” it can be reliably argued, is more dated political rallying cry than modern thoughtful analysis. The marijuana research is there, Joe Biden just needs credible exposure to it.

The Death of Charlotte

“We have been terribly and systematically misled for nearly 70 years in the United States, and I apologize for my own role in that,” CNN Chief Medical Correspondent Sanjay Gupta said of marijuana in a globally-broadcast confession nearly seven years ago. It was a 180-degree about-face from the op-ed he wrote for Time Magazine in 2009 entitled “Why I Would Vote No On Pot.”

For the first time, Dr. Gupta had been exposed to the medicinal properties of cannabis, and in what would become a timeless story with rippling effects, it was a little girl who got him there.

Charlotte Figi became the nation’s arguably greatest exposure to the benefits of CBD oil after using it to control the constant seizures experienced from her severe Dravet syndrome at age 5. The Colorado girl experienced up to 300 grand mal seizures per week and used a wheelchair, before using CBD drastically reduced her rate of seizures.

Dr. Gupta’s interviews with Charlotte’s family, cannabis researchers, and caretakers led him on an unchartered journey to more closely examine the possibilities of cannabis as a medicine. His findings were brought to a national and global audience in a way no other medical marijuana cases had been before, igniting a momentous push toward medical marijuana reform.

On March 26, 2020, her mother, Paige Figi, wrote on Facebook that all five family members were sick with “fevers, pains, coughs” and were “struggling to breathe.” An initial test for COVID-19 came back negative, but as Charlotte’s condition worsened, hospital staff treated her as a likely COVID-19 case.

On April 7, 2020, Charlotte passed from complications with the virus at age 13. Her death was first announced by the group co-founded by her mother through the Realm of Caring Foundation, an organization she chartered to empowering individuals, medical professionals, and the community through research-based education on hemp, CBD, medical marijuana, and THC.

“Charlotte is no longer suffering. She is seizure-free forever,” Paige Figi wrote on her Facebook page. “Thank you so much for all of your love.” 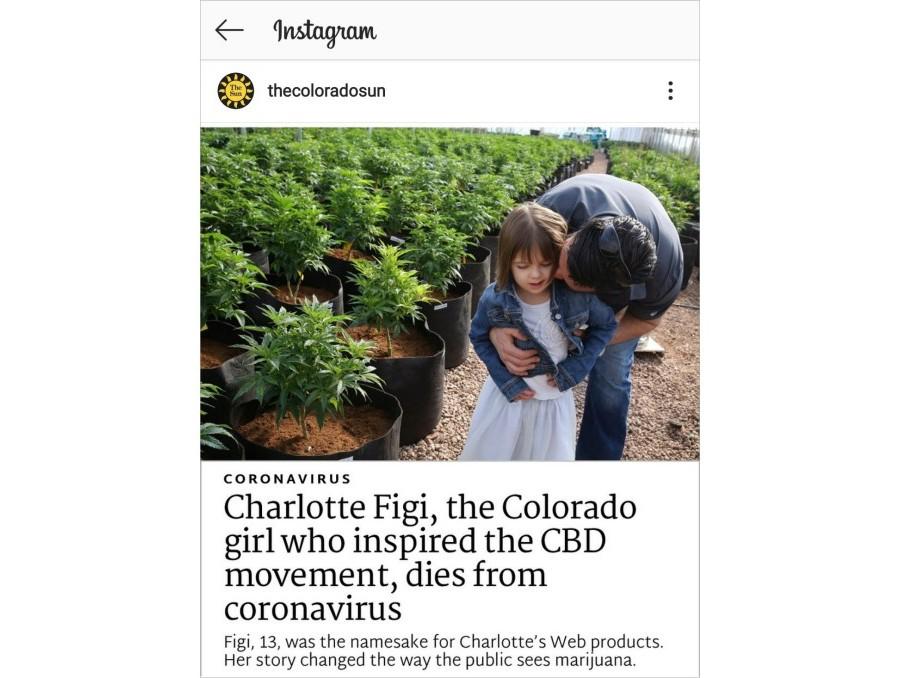 Charlotte’s story brings it all together: the imperative for scientific thought and consideration in political policy for both marijuana and COVID-19. The country’s partisan split regarding the relevance and dependence on science to make informed, data-driven health and wellness political decisions will play a key factor in November’s presidential election.

Charlotte Figi exemplifies the importance of foundationally sound policymaking. By immersing himself more deeply into marijuana research, Biden can firmly demonstrate his commitment to leading a “science-first” presidency – one very different than what exists today.

This is Dr. Sanjay Gupta’s tribute to the life of Charlotte Figi:

We’ve already seen Joe Biden shift to the left before. Earlier this year he pivoted to include the Sanders-championed proposal of free college and university education in his platform, announcing a policy to make public colleges and universities tuition-free for all students whose family incomes are below $125,000.

See Also: Nothing Silly About Psilly From Mushrooms And Its Medicinal Properties

On April 9, 2020, the former vice president proposed lowering the age eligibility for Medicare from 65 to 60 and eliminating student debt for some lower-income families. Both are issues that make up the foundation of the Sanders platform.

A shift in his marijuana thinking would be much sharper, but perhaps even politically safer.

According to a poll from the Pew Research Center 78% of Democrats and Democratic-leaning independents say marijuana should be legal. At the same time, 66% of Americans favor legalization, and more than 90% support enabling physicians to prescribe medical cannabis to patients, according to an April 2018 poll from Quinnipiac University.

At the same time, a new survey conducted by IBD/TIPP, found just 34% of independent voters believe Trump is handling the COVID-19 pandemic well, surging support for Biden among those voters, 47 percent to 41 percent, respectively.

This kind of pivot could set the tone for enabling so many other things, as well, including:

Each of these will be desperately needed in the eventual wake of this COVID-19 crisis. If there were ever an ideal time for marijuana to help invigorate the U.S. economy it’s soon to come.

Most of all, federal marijuana legalization would be a unifying, bold move.

The desire for bold moves is what Bernie supporters are driven by, and this is one that cannabis scientists, cancer researchers, struggling farmers, poor municipalities, and tax-burdened cannabis businesses are all eager for as well.

The preceding article is from one of our external contributors. It does not represent the opinion of Benzinga and has not been edited.

© 2020 Benzinga.com. Benzinga does not provide investment advice. All rights reserved.